Bunaken National Park is a tourist attraction located in the Gulf of Manado – North Sulawesi with an area of ​​about 8.08 km square, this tourist spot is one part of the government of Manado city which is the capital of North Sulawesi. Here there is a very beautiful Marine Park located around the island of Manado Tua (Mantehage and Siladen). To enjoy the underwater atmosphere of Bunaken you have to dive into and move to the rhythm of the waves that flow.

The charm of an amazing underwater world will be found here, there are about 13 species of coral reefs that rose steeply downward vertical depth of approximately 82-164 feet. You will also be spoiled with views that are served by about 91 species of fish in the Marine Park Bunaken. among other white koi (Seriola rivoliana), local gusimi (Hippocampus), indigo trunk (Scolopsis bilineatus), goropa (spilotocepsep hinephelus and hypselosoma Pseudanthias), lolosi yellowtail (Lutjanus kasmira), and many others. not only that here are also commonly found mollusks such as fish heads goat (Cassis cornuta), nautilus (Nautilus pompillius), giant clams (Tridacna gigas) and tunikates or askidian.

For travelers who love scuba diving, this is one of the best places to do the activity. there are about 20 points which can be used for diving, where you will get a chance to swim into the sea with surrounded by diverse marine life is very charming.

Bunaken can be very famous as it is now because of the beauty of the marine park, this tour was discovered in 1975, and used as a mainstay tourist attraction of North Sulawesi. In fact the territory of Bunaken has been populated by the population since 1400, and the first inhabitants of this place are immigrants from the kingdom of Bowontehu (old Manado) and the occupied territories include Bunaken, Mantehage, Siladen, Naen, Talise, Bangka, Ganges and Territories The northern coast of the Minahasa peninsula

In the 1850s, the people who occupied Tanjung Parigi moved to the Southeast, located on the edge of the beach and directly opposite Manado City itself. Then the community established a land which they named “Wunakeng” which stands for the name “Kinawungakeng”, said Kinawunakeng itself has a meaning of residence. Then on its development, the word “Wunakeng” itself was changed to Bunaken which stands for “Pamunakeng” which means the landing of a boat. 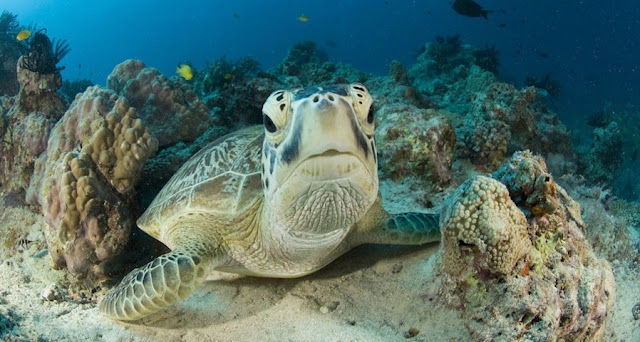 At first the Bunaken National Marine Park was discovered by a group of divers from Manado City who attempted to do diving expeditions here in 1975. And as they dived, local fishermen warned the divers that the places they were diving were Evil spirit, but the divers did not flinch and continue to dive. After they trace the place under the sea of Bunaken, the divers discovered the sea plants on the coral walls are still pure and rare fish, which makes them amazed to see such a fantastic scene. Bunaken has since become a very fascinating tourist attraction in North Sulawesi. Then in 1991 this place became one of the National Parks in Indonesia and in 2005 Bunaken National Park became one of the world heritage sites after being registered to UNIESCO.

To reach the tourist area of ​​Bunaken National Park is very easy. If you travel by air, you can directly transit at Sam Ratulangi International Airport in Manado City. Where the airport is connected with other major cities in Indonesia such as Jakarta, Surabaya, Makasar, Balikpapan and also Denpasar Bali. Other than that for you who come from abroad like Malaysia, Singapore, Philippines can also directly transit at this Airport.

Then from Sam Ratulangi Airport your journey continues to Manado City by taxi transportation, from Manado to Bunaken Island itself, the journey continues through the existing port of Manado to Marina Blue Banter and Marina Nusantara Diving Center (NDC) in Kecamatan Molas, Approximately 30 minutes. After arriving at Marina Blue Banter is still needed 10 to 15 minutes trip by cruise to the dive site, otherwise if you pass the Marina Nusantara Diving Center (NDC) takes 20 minutes. Besides other alternatives to get to Bunaken Island from Manado, you can use boat transportation that you can rent from Marina and Bersehati market.

Activities that can be done on the island of Bunaken most are snorkeling or diving, so you can enjoy the charm of the beauty of Bunaken as a whole and clear, here there are approximately 23 dive sites that you can visit. For those of you who want to do snorkeling do not be confused and bothered to bring dive equipment because around here has many providers of equipment – diving equipment that you can rent of course with cheap price range IDR 100.000 for one day.

Breathtaking underwater scenery Bunaken is very dear to pass up, the various species of coral reefs are amazing with its unique shape to form the curve of a beautiful curve to make your eyes will be amazed by it, besides the beauty generated from the tunnel – the existing small tunnel Under the sea, making this place an underwater paradise impossible to find elsewhere. The best dive sites around Bunaken and old Manado are as follows.

Bunaken Timor is one of the recommended snorkeling sites, but keep in mind this place has strong underwater currents. You will find a lot of fish species that live in this area. In addition, some types of coral reefs also adorn the underwater charm, although perhaps not as spectacular the other. But you can see the life of eagle rays, sharks, turtles, and some big fish that swim around, not only that the sights served by the seaweed cultivation and the small caves that adorn the walls will hypnotize anyone who witnessed the scene of the place this.

Mandolin is a marine park that has walls and cliffs inhabited by thousands of fish that live in hordes like unicornfish, surgeonfish, bannerfish and sniper fish. The fish here are so tame that they are easy to approach.

Just like other snorkeling sites in Bunaken, Muka church is a very beautiful place that is a pity to miss here as well as there are many thousands of fish in shallow waters and troughs stretching toward the sea walls.

Barracuda peak is one of the furthest snorkeling sites located in northwest Bunaken. In this place you will find a gigantic Barracuda horde that swims among tuna and jack fish. Therefore this place is called the Barracuda peak.

5. The ruins of a ship in Manado

The next location is the Ship Ruins in Manado, a long ship with a size of 196 feet is under the sea with a depth of 78 feet or about 75 feet below the sea. It is said that this ship was once a ship owned by a German trader who drowned in 1942 near Molas Beach. The vessel is split in the middle so it shows the steering room and the handle of the cargo, this place visibility can be reached about 32 to 49 feet.

The next snorkeling spot is Siladen. This place has smooth coral walls and forms a beautiful landscape and will look alive when the currents come. The location of the shallow sea shows its own beauty with fish and schooling snappers.

Another place that can be used as diving destination is Tanjung Kopi. Tanjung Kopi is a small wall that is also much inhabited by a bunch of barracuda fish and sweetlip fish. In this place the visibility in the shallow water location is not so good, but what makes this place interesting is the number of fish you can observe. One example of species of fish living in this place is the Nudi branch and the Gobi Fire Fish.

Wall Lekuan (I, II, III) is a long wall in Bunaken, this place is divided into three places that are Lekuan I, II, and III. Third – all three have a marine park that can be said best from other places in Bunaken. The Lekuan Wall has steep walls and deep crevices, not only that here you will encounter a sea fan and a giant sponge as well as some shallow locations and filled with Big Old Big Fishes swarming in groups and live turtles In this region.

The beautiful scenery served in the Bunaken area is not just that, but you can also enjoy the charm of the beauty on the surface that is served by the beauty of the five islands in the area of Bunaken National Park. Among the five islands of Bunaken, old Manado, Siladen, Mantehage and Nain. In addition you can also enjoy the cultural tourism of Bajo tribe who live here. For you bird sanctuary lovers Tangkoko Dua Sudara Nature can be your tourist destination in Bunaken.
Bunaken Typical Souvenir
Souvenir which you can get if you visit enjoy the natural beauty of Bunaken most is Manado typical souvenir, the souvenirs are as follows:

Sea Kayaking In The Andean Fjords – For lovers of water tourism, Andean Fjords name is certainly not foreign anymore. Andean Fjords is located in northern partagonia, chile. Where you often encounter tours and travels that offer the beauty of this water tour in its travel package. Although not as popular as the Andean highlands […]

Is Gili Trawangan More Exotic Than Bali? – Who is not fascinated by the beauty of Gili Trawangan? The landscape of the island is still natural, clean, and extraordinary beautiful to make a lot of tourists want to feel the holiday sensation of this island. Moreover, according to a survey compiled by one of the […]